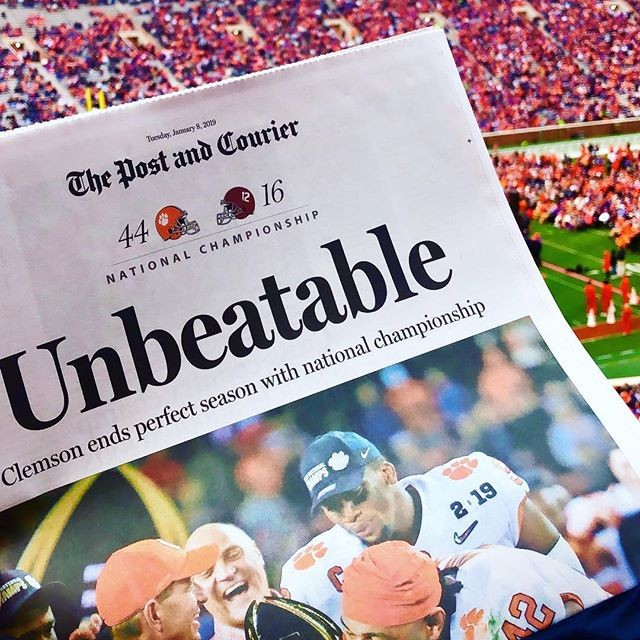 By Kevin Heaton, Family CFO and Founder of i3

When Coach Dabo Swinney was first interviewing with the board for the interim Coaching position at Clemson, a now famous exchange occurred:

One of the board members said to the Coach, ‘We are very committed here. We just want to be great academically and athletically, like Georgia, Florida and Michigan.’

To which Coach Swinney replied:

‘Sir, I do not want this to be disrespectful, but that is not my vision for Clemson at all. I want for all of those other schools to want to be like Clemson.’

To make that a reality, Coach Swinney began a period of implementing what some refer to as the Saban method of recruiting. Dabo Swinney took over the Clemson program in 2009, and one of the first things he did was apply the recruiting methodology of decisions based upon documented information.

In an interview with ESPN in 2011, then Clemson defensive coordinator Kevin Steele said of Swinney and his approach: ‘I call it the relentless pursuit of information and communication. When a recruit comes to campus every coach on our staff knows everything about that prospect because we have discussed them so much in our meetings and we have evaluated them.’

Swinney’s recruiting reputation became evident when he produced five top-20 ESPN recruiting classes in a row and ranked in the top 25 for all ten years of his leadership. The 2018 signing class marked Dabo Swinney’s tenth as Clemson’s head coach – and many consider it the top group of signees in school history. At no other point in school history has Clemson signed five 5-star prospects in the same signing class.

It’s difficult to argue with success.

For Coach Swinney, part of recruiting is building up the legacy of infrastructure to support coaches and players alike. The ultimate goal for players and program employees is to dominate in life and at the same time develop as players and professionals.

As a part of this, support from more than 17,000 donors is critical to building out support for all athletic programs. IPTAY (originally named ‘I Pay Ten a Year’) was founded in 1934 and through donors, provides millions of dollars in scholarships for student-athletes and non-athletes alike. It also has provided substantial support for programs and facilities that help Clemson Athletics stay competitive in collegiate sports.

As detailed in a 2016 ESPN digital article, Davis Babb, CEO of IPTAY’s 12-person annual staff, called Swinney a significant development officer for the group and credited Coach Swinney’s willingness to make himself available and accessible as one factor contributing to their current success.

Currently, Clemson University is embarking on its first comprehensive capital campaign plan for improving athletic facilities, providing scholarships for student-athletes, the addition of the Nieri Family Student-Athlete Enrichment center and funding the programs necessary to ensure that Clemson will remain competitive.

To complement the support of donors, one of the early infrastructure initiatives the program implemented was creating a strong social media presence; in 2013, Jonathan Gantt was picked to lead as the Director of New and Creative Media and grew the social program to one of the top most followed programs on Twitter by 2017.

Gantt credits part of the success to working in synergy with the informational recruiting goals of the program. The team utilizes social media to reach recruits and to create content that answers the question: What’s it like to be a Clemson Tiger?

There’s a synergy and unity of voice in what they do with and say about the recruiting department. Creating a formal social media discipline and IPTAY are just two examples of creating a solid infrastructure to support overall program goals.

If we look back ten years, Coach Swinney was somewhat of a compromise hire – an interim – replacing the retiring Tommy Bowden. The high-profile Abernathy hotel in its prime location just a block north of Memorial Stadium did not yet exist. Clemson was a small school in a small town.

That choice to invest and to grow that investment has been incredibly sound.

According to a September 2018 Forbes article: ‘Applications have soared amid Clemson’s football renaissance as students who might otherwise have never considered attending college in a small southern town are increasingly considering doing just that.’

‘The quality of students has risen too. What was once perhaps a “safety school” for high school seniors is now an aspirational one such that average SAT scores for successful applicants have risen in concert with the football team’s prominence… Clemson is now much more than a brand name for NFL GMs. As the team’s wins pile up, so does the university’s notoriety elevate the resumes of Clemson students who will never step on the football field during their four years there.’

‘What about the school itself? Once again, a profound transformation. For obvious reasons. When the football team is winning, excitement among alums jumps. And when graduates are excited, donations soar. The football team’s $55 million, state-of-the-art Allen N. Reeves football complex sits where unused farmland once did. And as contributions to the athletic department have zoomed upward, all sports at Clemson have benefited. The golf and baseball facilities alone would knock any reader over with their opulence, as would the Swann Fitness Center that is available to all students’ [and guests of The Abernathy].

I’m analytical by nature and keenly interested in what drives success.

Just as building a National Championship team requires key information upon which to base decisions, a sound infrastructure, and a wealth building and investment strategy, private asset management requires the same.

Those families who have grown wealth through family enterprises over generations require access to relevant, timely and sophisticated information allowing key decision-makers to make informed decisions, the infrastructure to acquire and manage assets while preserving and growing a portfolio of private holdings, and sound investment options that allow continued (re)investment of capital.

I founded my company – i3 – and named it based upon these principals.

At i3, information, infrastructure and investment are at the core of our family asset management services.

For i3 however, it is also our personal experience in combination with our intimate understanding of how family behavior(s) are woven into the fabric of each family’s asset management strategy, that drives our growth and our client successes.

And just as Coach Swinney, we aren’t trying to replicate any other firm or service. Our voice, approach and record of success are all unique to i3.

To learn more about creating a sound Private Asset Management strategy for your family office, visit us at i3resources.com

Follow i3’s Founder and President, Kevin Heaton, as he puts pen to paper to reflect on his twenty-plus year career as a CFO for high-net-worth families on his Substack Blog, Family Matter.

Wealth is a Gift, Not an Entitlement: i3 Founder’s Article Published on Family Business Magazine Website

As my dad used to say “life is not fair,” but we can strive for harmony in the family business, and set families up to never experience a lifestyle disruption, nor to believe that an unjust enrichment has occurred.

i3 Founder Publishes Article for Family Business Magazine: The Fairness Trap, 9 Tips for Families in Transition

In my 20 years of meeting with family-owned enterprises and managing family wealth, I have yet to meet a family who is free from the struggle of defining fairness among family members. Why is it so hard to define fairness?

Ways for Your Family to Invest in Commercial Real Estate (CRE)

The last decade has proven to be a golden age for Commercial Real Estate (CRE). If you have not yet chosen to invest in CRE, I’d certainly venture to guess that you have been approached about it.

After twenty years of working with families in business, we have learned that they accumulate “things” that are filed away in those filing cabinets and—in many cases—these things are now worth a lot of money. Here’s a look at how your family can keep track of your (filing cabinet) assets.

Watching Meghan Markle and Prince Harry’s interview with Oprah earlier this spring, I could not help but wonder how the Royal Family felt while watching the interview, or even how they felt when first hearing of its existence. If I had to venture a guess, their emotions likely spanned anger, frustration, confusion, retribution, indifference, or…all of the above.